YA Review: The Sun Is Also a Star by Nicola Yoon 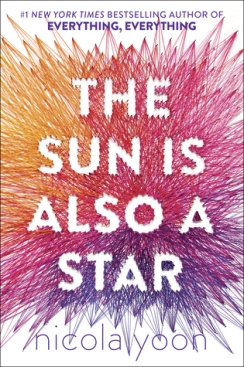 In short: Over the course of one day, romance blooms between a Korean-American boy and a Jamaican girl whose family has lived in the States for several years, but her family is scheduled for deportation back to Jamaica that night.

Worth a Look? This gorgeous second novel from the author of Everything, Everything has everything going for it: the timely topic of immigration, the timeless topics of epic-yet-doomed love and the slippery nature of the American dream, a sweet-hot romance of opposites attracting, a tiny bit of poetry and script format mixed in with the prose, and an overarching theme that we see ourselves as main characters but might be mere digressions from someone else’s story. The central duo butt heads over passion (him) versus practicality (her), poetry (him) versus science (her), and fate/true love (him) over no such thing (her), but the chemistry of these two lovingly developed characters is electric.

Worth Acquiring? Yes. Don’t be surprised to see The Sun Is Also a Star hit a few shortlists.