Loud amplifiers blare until 10 pm, dust clouds blow down the street, and I can’t park in front of my own house. Yes, it’s county fair time once again! After three fairground-adjacent years in our house, I must say my honeymoon with the fair is over, but that certainly doesn’t mean I can’t take advantage of the opportunity to use it as a storytime theme. Why, it’s almost like doing a holiday theme, and I don’t have to worry about excluding anyone on basis of religion!

Night at the Fair by Donald Crews

Basically just a bunch of cool pictures of the fair at night, this book is a nice intro to all things fair and a good way to start conversations and get excited. 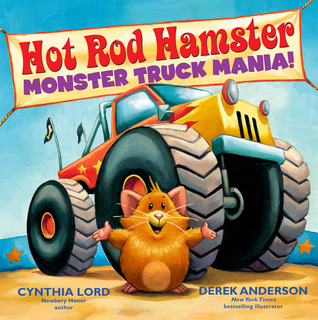 Hot Rod Hamster and his friend Large White Dog Whose Name I Don’t Know go to the fair to see a monster truck show. While they’re killing time, they go on a few rides, and the book asks you to choose your favorite kind of boat, bumper car, and tea cup on each ride. Most of us wanted to ride in the sailboat or submarine and wanted to drive the race car or the rocket ship bumper car. Finally, they go to the monster truck show, and since the driver has broken his glasses and there’s no one to drive, Hot Rod Hamster steps in, saves the show, and lives his dream. Admit it, we’ve all had some variation of that fantasy! As thanks, he gets enough fair tickets to buy everyone treats, and you get to pick out your favorite sweet. Our fair has zero monster trucks, but the boys in the audience did not give a crud about accuracy. I showed them pictures of monster trucks!

Concept: Vocabulary! We talked about which ride car was what and then they had to tell me which one was best.

Cows to the Rescue by Jon Himmelman

This entire series is hilarious, although the recent Duck installment went pretty hard for poor Duck, who, let’s face it, just doesn’t have the same life skills as the rest of the animals on this farm. Anyway, the cows masterfully solve everyone’s problems with many cries of “Cows to the rescue!”

Concept: More background knowledge. Can you believe none of my storytimers knew what a three-legged race was?

I Know a Wee Piggy by Kim Norman

Same structure as I Know an Old Lady Who… but with a pig who won’t stop wallowing in different colored messes and rampaging through the county fair. You can sing it! One of our branch managers pointed this one out to me.

Instead of a flannel board, we re-did last year‘s Cotton Candy soda experiment. This year I used water instead of soda, and it worked great. We still didn’t taste it. So much sugar!

First, we played the Roller Coaster Game… Those dots were me looking quickly for a Youtube video of someone doing the game and not finding one. Okay, it’s like this: You all pretend you’re sitting in roller coaster cars. One person is the leader and faces the rest of the group. Then you all make like you’re holding your safety bars and say, “Click, click, click, click,” and so on like you’re going up the track. Then, when you get to the imaginary top, the leader throws up his or her hands and screams, then lashes side to side, still screaming, just like you would do on a real roller coaster. The people facing the leader have to follow their actions. You’ve probably seen it in a football stadium at some point. It looks much cooler from far away, but it’s fun and easy for preschoolers. All they have to do is copy a goofy adult while yelling. Perfect.

We all walked in a circle, bobbing up and down like carousel horses, while saying this rhyme. We jumped high on “up!” and threw ourselves to the ground on “down.”

Originally, we were going to do a cotton candy craft, destined to be lame. You can do a cool cotton candy craft with shaving foam and paint, but I needed something that wouldn’t take hours to dry, so I was trying to figure out how to make white stuffing out to be acceptable as cotton candy. Our outreach coordinator mentioned that I could do a carousel horse craft instead with a straw. I don’t remember our fair having a carousel, but she and a couple of other coworkers assured me we do. Oh! Okay! Much better! We don’t have a horse die, but we have a unicorn die, and of course unicorns are so much better than real horses. To do this craft, I ran 40 unicorns on the die cut machine and made two slits in all their throats with a boxcutter. (My big joke: I’m a Death Eater now!) Then came the gluing of the sparkles, and then I ran a straw through the slits. I did it this way instead of using tape because the unicorn can slide up and down the straw. Easy, fun!

You guys, this plan went GREAT. I had very low Wednesday attendance again, but a couple of mom/daughter pairs who were new to storytime happened to wander in by accident, and they just raved about how good I am, which we all know means the books and activities I provided were good. Today I had 17 kids for the second session, and they loved everything! After we’d done three books and all the activities, I took a vote on whether to read one more story or go straight to craft time, as we had been at it a while. I explained what we were voting on and said, “Okay, first, raise your hand if you would rather hear another story before we do our craft,” and every hand went up. They loved this topic. They also loved their carousel puppets. One little boy showed me that he’d glued many sequins on the front of his, and one tiny silver sequin on the back. I said, “Wow, you have a secret sparkle on the back!” and he went around telling everyone about his “secret sparkle” over and over for the duration of craft time.

Next week: Bugs, the storytime kit that time forgot.

Another year, another storytime series, another chance to try to keep up with my storytime blog. We’ll see how it goes!

This year, the opening week of storytime happened to coincide with our local county fair, so I took a one-week break from testing storytime kits (only 11 to go, y’all!) and put together a fair-themed storytime.

Night at the Fair by Donald Crews

A basic intro to all things fair, minus the stock buildings. Beautiful illustrations of lighted rides! I felt a little bad because the fair in the book is on a much larger scale than ours, but I don’t think the kids will realize that.

Brother and sister ride a Ferris Wheel for the first time. The text is verse. Not straight-up preschool-style rhyme, mind you, but verse. I skipped over a couple of parts in my second session, which was up against short attention spans. The illustrations are gorgeous but extremely trippy. The wheel is a wheel…then it’s a washing machine…an apple tree…a bunch of bathtub cars with mermaids in them… You don’t have much interactive potential from the text, but you can talk with the kids about the illustrations FOREVER. Also, you get to tell everyone what “phosphorescent” means!

Cows to the Rescue by John Himmelman

This farm family has all kinds of fair-related troubles: broken down truck, muddy duck, pigs who didn’t study, kids who need encouragement to enjoy the fair… Who can help them? Why, the farm cows, of course! They save the day over and over to the refrain of “Cows to the rescue!” Short, cute, funny.

I adore Mem Fox, and this one is also illustrated by the fabulous Jan Thomas! So, this book has nothing to do with fairs whatsoever, but our fair has goats, so I decided to make it work. First, I said to the kids, “Does anyone know why it’s called a COUNTY fair?” I briefly explained what a county is (a group of towns who share things like fairs) and then said, “But I like to think it’s also called a county fair because it’s fun to COUNT things at the fair! Let’s practice counting something you’ll see at our fair: goats!” My storytimers LOVE to count, so this was a hit.

We did Jim Gill’s List of Dances with this one. Since it was long, I put it between the two most interactive books and didn’t do any other wiggle breaks. It worked great!

For this you need a clear cup/glass, clear soda, cotton candy, and a straw for stirring.

I poured the soda and showed the kids the cotton candy. I asked questions like, “What is cotton candy made of? What do you think will happen when we put it in the soda? Will it sink? Will it float?” (One answer I got: “I think it will make a more delicious soda!”) Then I dropped a hunk of blue cotton candy in with the soda. If you’ve never done this before, what happens is that the cotton candy fizzes away almost instantly. The soda changes colors. The kids yell, “MAGIC!” We talked about how cotton candy is made of sugar and what happens to sugar in liquids. After that, I also added pink cotton candy and we talked about why the soda then changed to purple. Minds were blown.

Poke a hole in the center of a paper plate. Poke a hole in a toilet paper tube near the top. Connect the plate and tube with a brad through the two holes, point ends inside the tube. You should be able to hold the tube in one hand and spin the plate with the other. Now, glue on strips of colored paper from the center of the plate going outward, like a starburst. Those are the spokes of the wheel. Then, draw people or animals on squares of colored paper and glue them to the outer ends of the spokes. Those are the Ferris wheel cars. And spin! It would be easier to decorate the plate prior to assembly, but my storytimers are too small to manipulate brads on their own.

Just great! I had small groups for some reason. Maybe everyone forgot storytime was finally starting. Next year, I might try to start the week before the fair, since I think we might have had lower attendance on Thursday because of it.