Button, button, who’s got the button? I do! This week, we talked about buttons. Buttoning clothes is a great way to practice fine motor skills children will need for writing, not to mention give them independence. Once you can do up buttons and zip a zipper, you have the ability to dress yourself in anything! Buttons themselves are a great tool to practice sorting, patterns, size relationships… They’re very math-y. Of course, we also use the word “button” to denote something we push to get an expected reaction: remote controls, elevator buttons, handicapped door buttons, etc. We looked at both.

A little boy loves playing with the loose buttons his grandma keeps in a box. He counts them and sorts them by material, size, and color. He and his grandma pull out buttons at random and compare how they are alike and different. The kids weren’t hugely into the plot, but they liked looking at the pictures of all the buttons, and the story itself models great early math activities for parents.

Pete the Cat and His Four Groovy Buttons by Eric Litwin

I love this book for two reasons. First, because it encourages counting and basic subtraction. Second, because its “buttons come and buttons go” message emphasizes the transience of material things and the futility of becoming overly attached to them. Third, because you can listen to the cute song online and either play it in storytime or just sing it yourself, which is what I did. Wait… That’s three reasons. I guess I love it more than I thought! 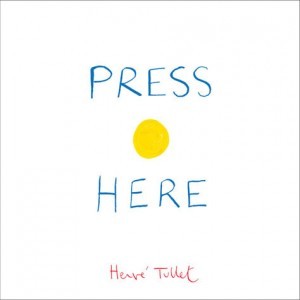 Technically, the “buttons” in this book are dots, but we called them buttons. It just seems natural since pushing them makes things happen on the next page! This book is completely interactive. Kids really believe that if they push the yellow dot and the next page has two yellow dots, they caused that second dot to appear. It’s a great lesson in cause and effect, and it plants the idea that books are magic. Granted, it plants the idea a bit more literally than usual. Similar books include Tap the Magic Tree (which I will use in a season-themed storytime later this year) by Christie Matheson and Don’t Push the Button! by Bill Cotter.

Concept: Counting. Pattern recognition. Play and pretend. Cause and effect.

Buttton, Button, Who’s Got the Button?

I wanted us to play Button, Button, Who’s Got the Button, but that game is a little difficult in a group of toddlers and preschoolers who may or may not understand how to play, and who may or may not know each other’s names for guessing. Instead of playing the game or making a flannelboard, I combined a flannel set I already had with the game. First, I stuck a Velcro dot (hook side only) on the back of a button so it would stick to the flannelboard. Then I got the 10 in a Bed bears from last week out again. I had everyone cover their eyes while I hid the button behind one of the bears, and then we guessed which color of bear had the button. They loved this game, and with 9 bears (I only used one of the pink bears), guessing actually took quite a long time for once.

I don’t know this song’s provenance, but several Scout Song resources have it listed. I abbreviated it slightly to:

You say it again and again, changing the body part to right hand, left foot, right foot, head, and bottom, cumulatively. By the end, you should be moving your hands, feet, butt, and head all at the same time. Then you repeat the lyric, but you tell the boss, “YES!”

Shortening it meant we couldn’t really sing the song. We just said it as a chant. But we didn’t have time to sing the entire song, and long lyrics make the kids bored. You have to keep changing things up on them quickly or they sit back down.

Craft: Pete the Cat with Buttons

I printed a Pete the Cat and His Four Groovy Buttons coloring page from the Internet. We colored Pete, and everyone had four buttons to glue on over the drawn buttons. Be sure to remind caregivers that the littlest storytimers may try to eat the buttons! Storytime crafts are usually full of choking hazards (glue stick lids, crayon pieces, etc), but buttons can look like Skittles to little ones so you want to be sure parents are paying attention.

I won’t forget these sessions any time soon. In addition to my regular in-house Wednesday and Thursday storytimes, I did a storytime at a daycare as a stand-in for our sainted outreach coordinator. All three groups of storytimers loved this program! They had a blast with the extension activities, loved singing along with Pete the Cat, and went, “Aw, but…” when we got to the end of Press Here because they wanted it to keep going and going. At two sessions, kids came up to me afterward to proudly exhibit their shirt buttons. My favorite story is from today’s session, though. In all three sessions, I asked the kids if they knew what “groovy” means before we read Pete the Cat. No one knew, so I explained it as, “If something is groovy, you think it’s really cool. You like it a lot! So if you really like your shoes, for example, you would say, ‘My shoes are groovy!'” I was wearing a shirt with a cartoonish owl on the front, and one of the little girls in my third session said, “Can I tell you something?” and I said of course and she said, “I like your groovy shirt!” Yay! The compliment’s not important, but the fact that she learned a new word and was able to correctly use it right away is, well, just groovy.

Posted in Storytime and tagged button storytime. Bookmark the permalink.
← Newbery or Not: The Year of Billy Miller by Kevin Henkes
Newbery or Not: P.S. Be Eleven by Rita Williams-Garcia →